Luminous Productions renewed the artwork on their corporate website in April, 2020.
This "News" article features a production interview with Takashi Honjo, who created the new artwork. 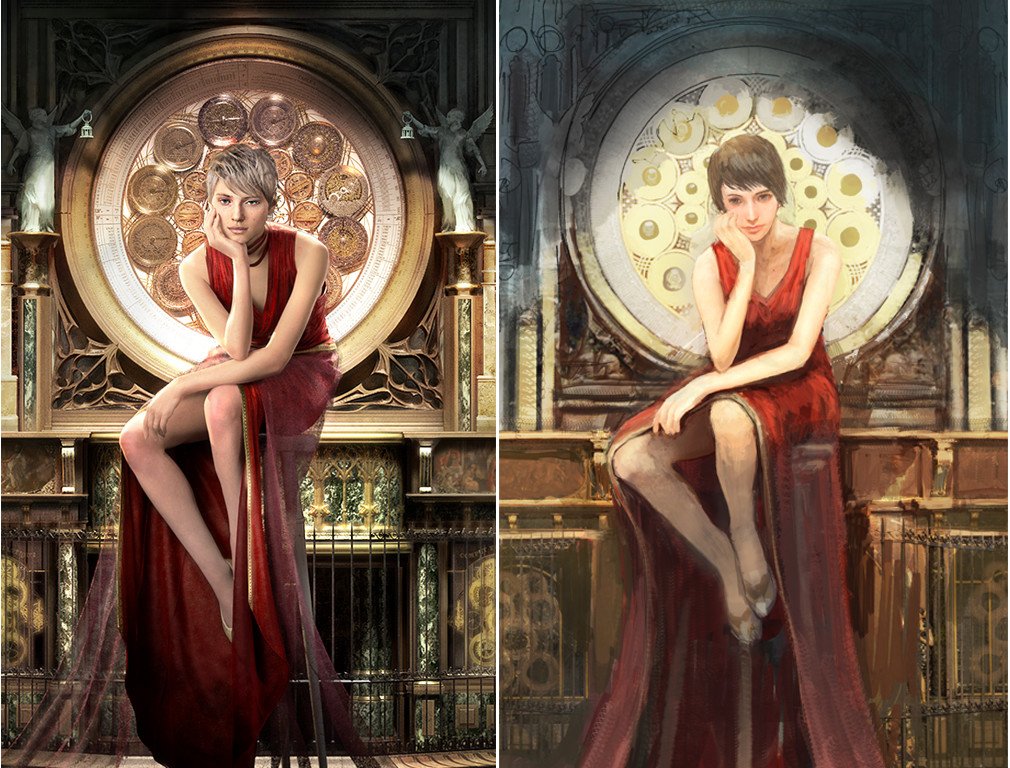 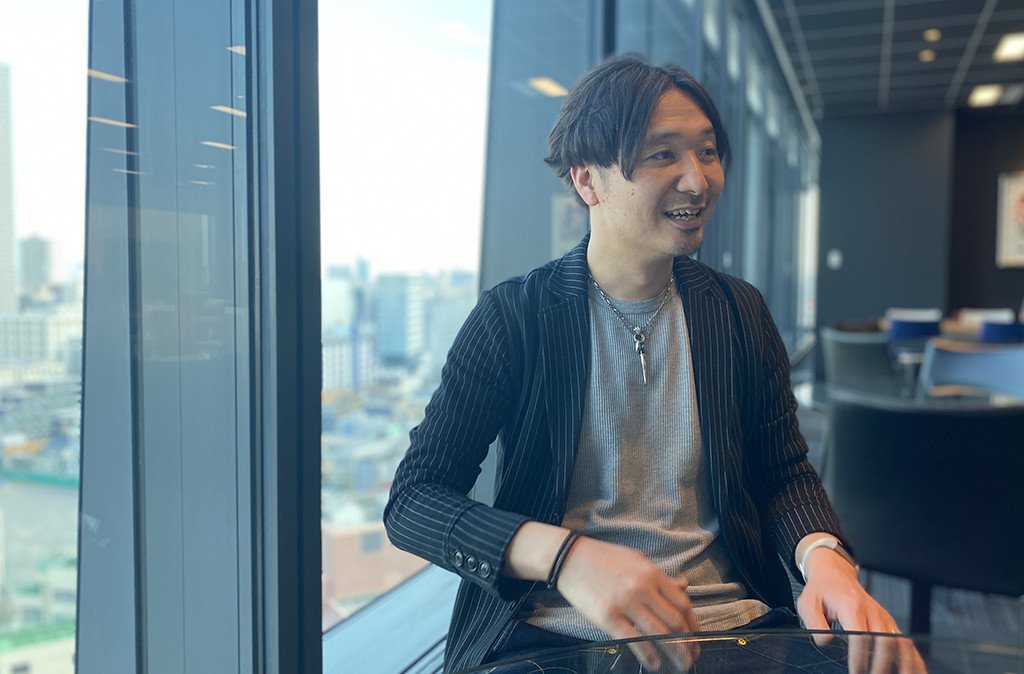 ―Since Luminous Productions is a game development studio, this particular concept art was created using their proprietary engine. What was the vision you had in your mind during the process of creating this piece?

Honjo：The concept of this artwork is to bring light (a nod to the luminous in our studio name) into the art drawn in 2D by drawing the illuminated areas as a real-time render with the Luminous Engine. From there, my intention was to represent the 2D part as "stillness" and the 3D part as "motion" through the art; in my attempt to achieve such expression, I built scenes and stories in my mind, which eventually led to this artwork.

―Please tell us how you approached the theme of "technology and art" and what sort of challenges you faced in achieving such an expression?

Honjo：Roughly speaking, the main challenge was to fuse 2D and 3D into a single piece of artwork while making the most of their respective characteristics at the same time.
However, if I simply drew both the 2D and 3D elements beautifully, that'd be nothing more than just merging the two. So, the task was to discover a way to intertwine these two elements while retaining the unique characteristics of each.

I asked the relevant teams to create the character and background in 3D CG as well as the lighting. When we regrouped and brought together what everyone came up with, I questioned myself "What direction should I take my artwork in order to bring out the best in each team's contribution?" "How can I fuse these elements together into one art without creating dissonance?" and so on and so forth. I explored these questions by drawing different versions and went through much trial and error (laugh).
―So, you actually drew several different versions yet none of them felt right to you?

Honjo：Yes, that is right. The initial version I drew fused the two elements so well that it ended up as a beautiful yet plain image. The approach of realistic drawing, which is essentially what the engine does, merges the respective elements too well as a piece of artwork, so it doesn't really communicate the concept. Therefore, I tried various expressions for the art part, none of which really felt right...I then decided to fuse these two elements with a relatively traditional method for concept art, in which the line drawing remain visible while the colors are applied over it.

I felt that having the expression combine a traditional method I've been using for the longest time and the latest, cutting edge 3DCG/ray tracing method could really bring out the good in both, old and new, allowing these characteristics to coexist in harmony.
Incidentally, a single ray of light is cast on both sides of the line drawn section. This is a light representation technique that emphasizes the fact that the artwork is drawn as a line drawing, by intentionally thinning the coating in certain areas. 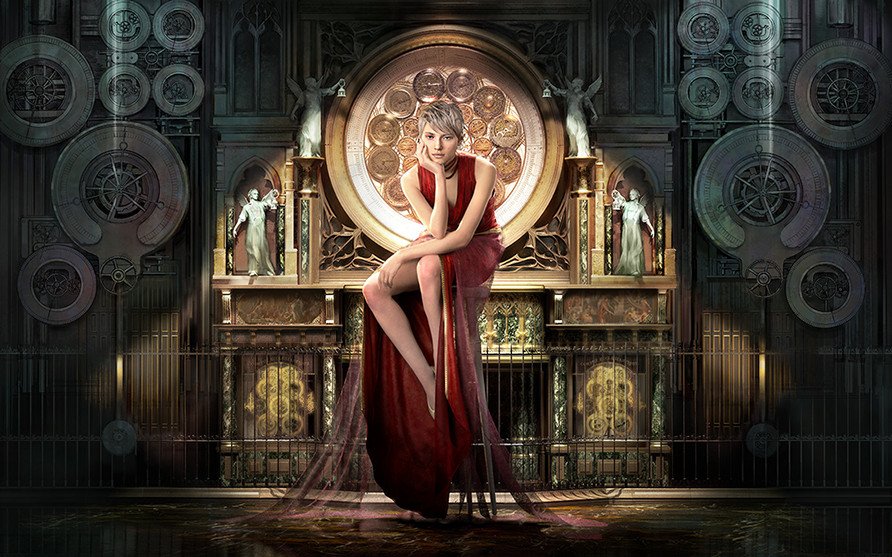 ■The main character of "BackStage" demo emerges from backstage to the stage. 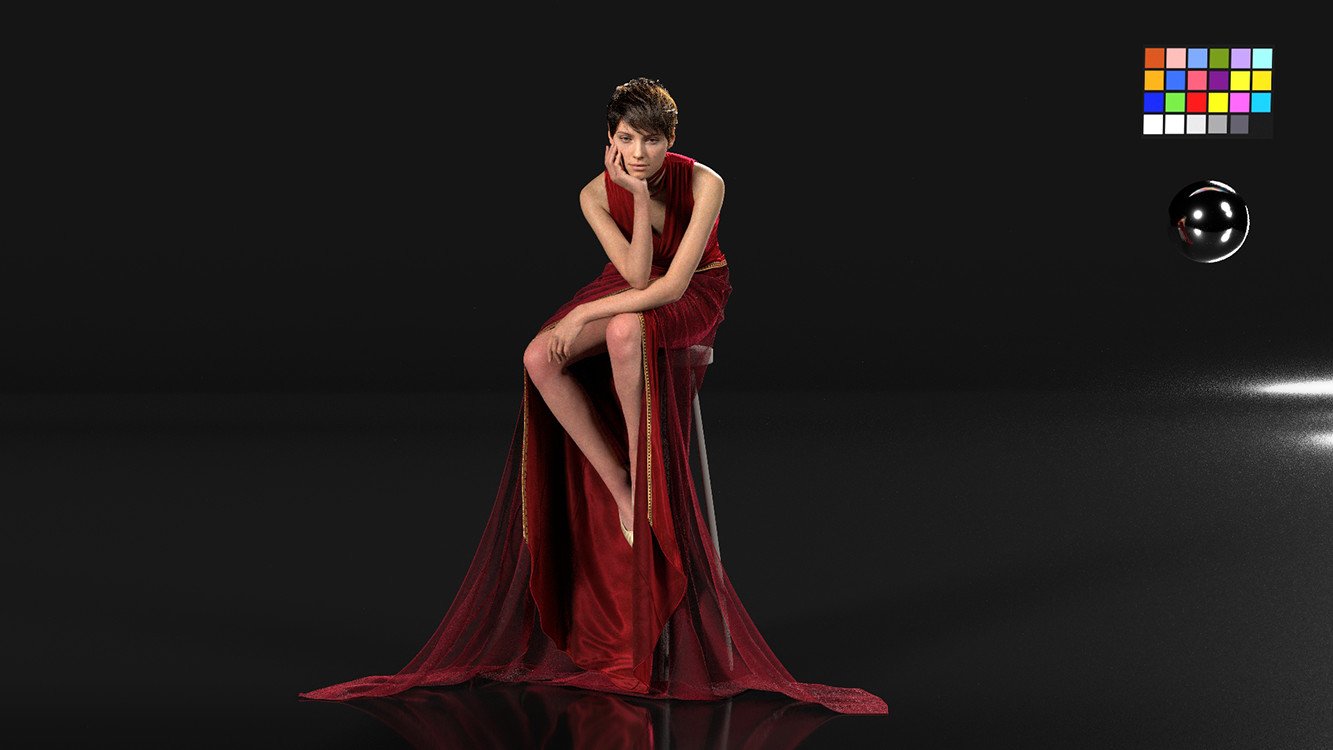 Model data before the fusion

―The female character in the center is the same character model featured in the "BackStage" demo the studio announced at CEDEC 2019. She now finds her way into this artwork with a different costume and hairstyle - what was the reason behind bringing her into this artwork?

Honjo：The "BackStage" demo depicts an actor backstage, preparing to go on stage. Drawing a connection from there, I envisioned a story in which the same actor is now heading out on stage from backstage.

When I first thought about the fusion of 2D and 3D, an image of this character living in a world that exists in the spotlight, came to mind. I envisioned that a different world exists in the artwork... or more like the dynamism and vibrancy of a living world come into existence in this light and that's the world where this character lives, so to speak (laugh).
If I tried drawing this character based solely on line drawing, that'd merely be a design image created by me. However, by casting lights into the art, the character can really be brought to life in the world she lives in; that's the image I had when I created this artwork.

■The work of the artist

―It's truly a work of imagination. Do all artists have the ability to come up with themes and build stories as you've done for this artwork?

Honjo：I think that is what our job is about (laugh). In the early phases of planning, the art team is often given tasks with very little information to work with, so, in a way, we're trained to expand our ideas from limited information. And I think it makes the artist's job even more rewarding if they can enjoy that process.

―This project was carried out by you from the art team, character modelers and programmers from the character team, and environment artists for the background assets. Is there anything that you liked in particular or you were wary of in the process of creating a single work through the collective effort of multiple teams?

Honjo：For this project, we didn't use our usual workflow as a starting point. Instead, I started off by presenting my concept to the team and sharing my goals with them. Each team was then asked to proceed with their own tasks, after which we brought our work together to finish the piece. 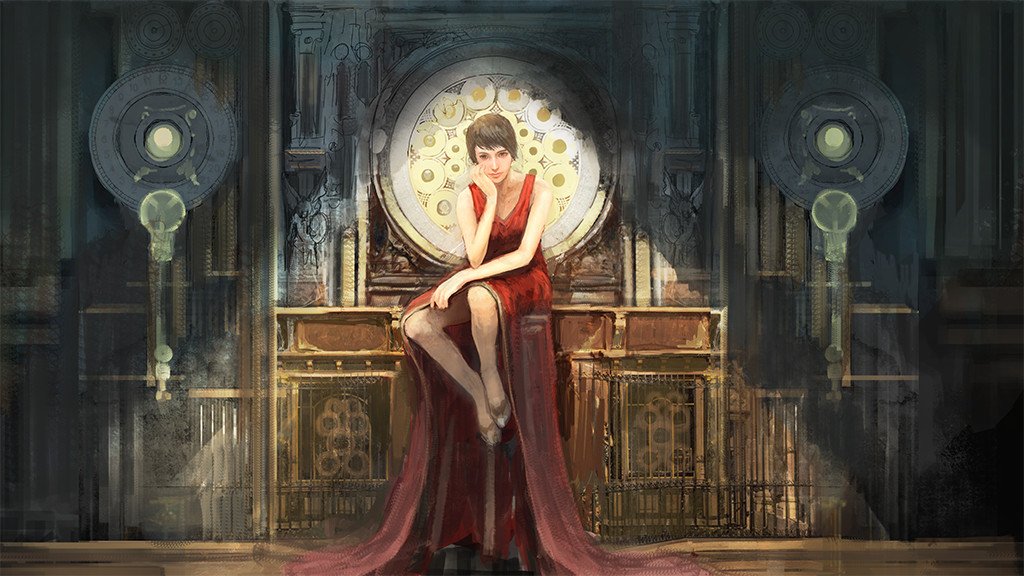 Honjo：What I initially shared with the team was a relatively simple rough sketch and concept; we all exchanged ideas about them and it started off well. It was great that what each team delivered stayed aligned with the initial concept from the beginning to the end. Everyone involved had a good understanding of the concept and were skilled enough to realize the concept as well, so I felt at ease about leaving the work up to each individual.

―So, some projects are workflow-based, whereas some, like this one, are kicked off with a concept. Is Luminous Productions equipped with the skill sets and the environment necessary for the employees to flexibility work in either way?

Honjo：Yes, I believe we are. For instance, even when we create games, in the initial phases of pre-production, we at times create deliverables in a session-like style where we work beyond predetermined workflows and teams. I think our employees are capable of working in a flexible manner like that.

―In the pre-production phase are the artists, designers, programmers and so forth able to exchange their opinions regardless of team?

Honjo：In terms of exchanging ideas and opinions, it doesn't have much to do with which team you belong to. It's an environment where anyone can express their opinions and because of that, each individual can figure out what they can do within their field and ultimately combine their opinions together. We can even push through that process pretty quickly as well.

Like in the game production of old, while you do have your own responsibilities to take care of at the very least, you also get to be involved in the entire process of creating the game even outside your own field. I think it's interesting that, at our studio, we can work on the large-scale development of a AAA class game in a style that is more common for a smaller-scale development.

A "sense of disquiet" as a calculated hook within the artwork 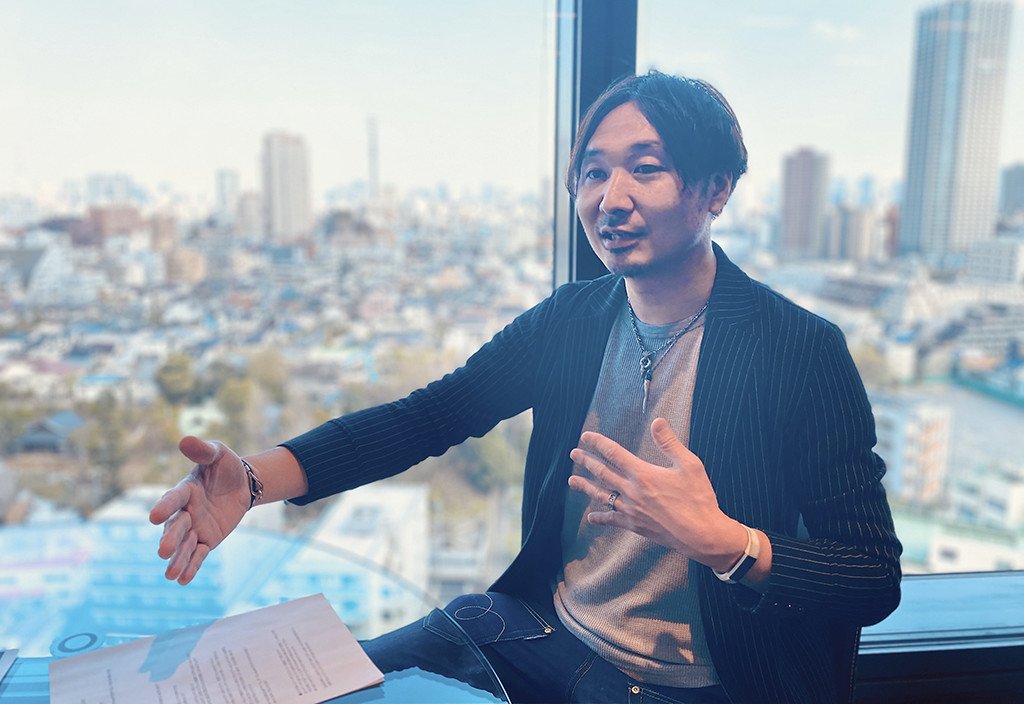 ―Lastly, is there anything you'd like to say to the viewers of this art?

Honjo：In my endeavor to express the fusion of technology and art, I intentionally infused a sense of incongruity to make it more than just a pretty image. When an artwork is too beautifully polished, it tends to stand out less and be overlooked. What catches people's eyes is the hook that something's not quite right. I hope you can revel in that sensation and let the intrigue draw you in when you look at this image. 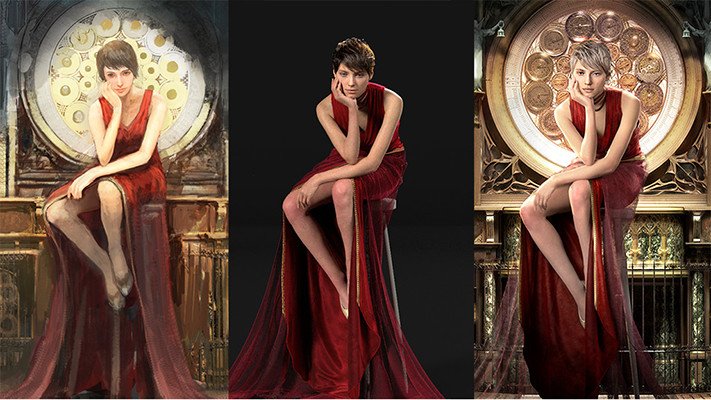 A concept art, neither real nor just a painting, brought to perfection as an intriguing artwork. We hope you can experience the sense of disquiet brought about by fusing the hand-drawn artwork of a 2D artist with 3D.